Back to Worlds Amazing Places

One of ‘The Char Dham’ (four divine abodes), The Dwarkadhish temple, also known as the Jagat Mandir

Considered one of ‘The Char Dham’ (four divine abodes), The Dwarkadhish Temple; located in the holy city of Dwarka & situated on the western tip of India where the River Gomti meets the Arabian sea, established by Lord Krishna “King of Dwarka” and significant Hindu pilgrimage. In the Mahabharata, Dwarka is described as a supreme city with opulent architecture. Also known as  Jagat Temple (Universal Shrine), Nija Templeor Trilok Sundar (the most beautiful in all the three worlds). As per archaeological suggestion, the original temple is believed to have been built more than 2200 years ago by Lord Krishna’s grandson Vajranabha, who constructed it over the land reclaimed from the sea by Lord Krishna. It is believed that Dwarka was submerged under the sea six times due to damage and destruction by the sea and modern day is the 7th structure built. The original structure was destroyed multiple time in 14th century, and subsequently renovated every while in the 15th-16thcentury.

Temple features a vestibule, sanctum and a rectangular hall with porches on three sides. There are two gateways and 56 stairs which leads visitor to the temple: on the North is Swarga Dwar (Gate to Heaven) and on the South is Moksha Dwar (Door to Salvation).

Temple stands on 72 monolithic massive exquisite sculptured adorning pillars and the main shrine is seven storeyed mesmerizing architecture, built out of soft limestone and granite. On the highest tip above the sanctum a seven colored, huge triangular shape silk flag hovers called Dhwaja which extents 84 feet high and is hosted on top of a pillar that is 20 feet high and 52 feet long decorated with the symbols of the sun and the moon that is changed five times day. The symbol on flag signifies Lord Krishna is present until the Sun and Moon cease to exist on Earth.

Styled with intricate detailing from base to walls to pillars, every corner of the temple is profusely carved with panels of elephants, dancers, heavenly being and musicians. The eve of Janmashtami (birth of Lord Krishna) is the most special occasion, where temple is adorned by thousands of devotees chanting prayers and rituals. More than five million people visits the shrineeach yearto seek blessings of Lord Krishna. The Dwarkadhish Temple is also home to one of the 4 Shankar Acharya Peethas – ShardaPeetha. 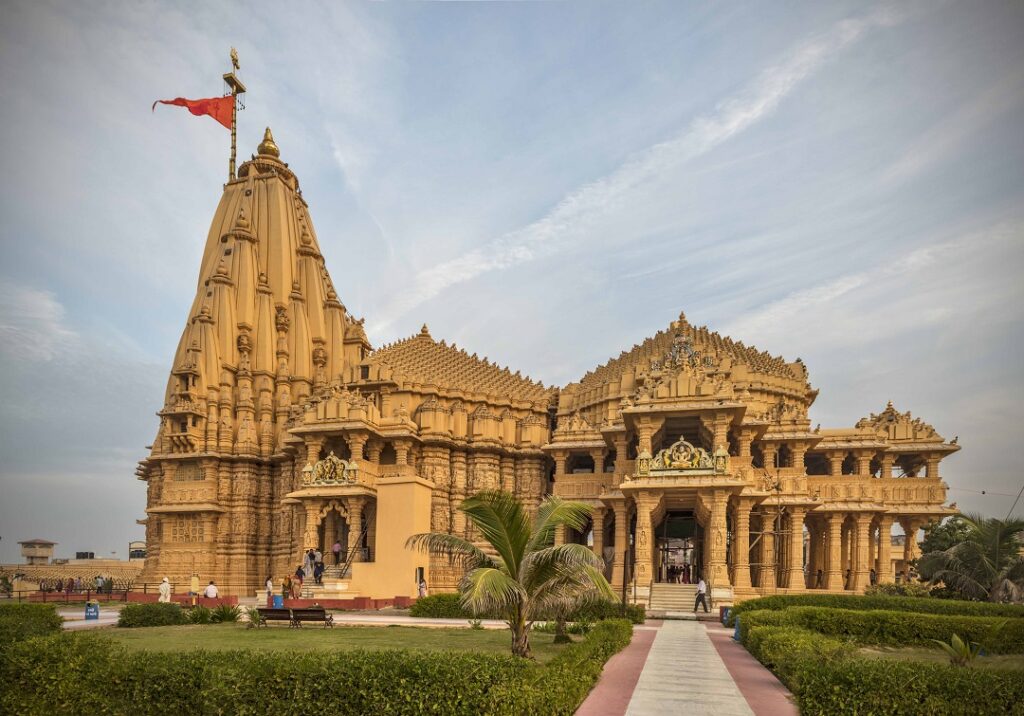